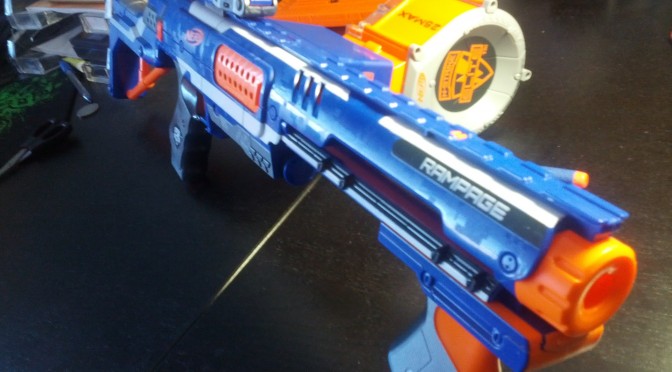 The Rampage was the second N-strike Elite blaster to be revealed, and also boasted the 75ft ranges that we were all looking forward to. From my initial review of the Retaliator, we know that these blasters are definitely capable of these sorts of ranges, but are somewhat lacking in the consistency department. Is the Rampage any better? Or was the Retaliator the Elite Series’ one shot wonder? (Again, we realise you saw the review on Urban Taggers and SGNerf already, but we’re building suspense anyway!) Echoes scored this one from Amazon.com as well for around $40, which he thought was a very reasonable price!

For the good parts of the review, keep reading!

The Rampage was unboxed after the Retaliator, since it was taken out of the shipping box second. The first thought as we laid eyes on it was “and we thought the Retaliator resembled the Recon“! Cosmetically, the Rampage shares almost every trait with its N-Strike predecessor, the Raider cs-35. It has the same shape, the same functionality, and the same sideways mag well. However, there were some noticeable changes. First, and probably most obviously, the drum magazine is no longer a large, heavy, cumbersome piece of kit. It’s now a sleeker, somewhat sexier design that seems far more practical for wars. Even though the capacity is 10 lower than the Raider’s drum at 25, we still think it’s a worthy replacement, especially for downward vertical mag wells. Another feature that we took notice of was that the small change to the way the slam fire mechanism feels. It’s much smoother than that of the Raider’s; it feels more refined and springier. We aren’t exactly sure what Hasbro did here, but it’s a very nice, and potentially crucial, improvement to what is already a game changing blaster mechanic. The final change is a glaring omission. Where the Raider came with a stock, the Rampage came with absolutely nothing. It was slightly disappointing that Nerf had decided to leave the oh so important stock out of the Rampage’s box, but it wasn’t an absolute deal breaker – Who used the stock for their Raider anyway??

In the hand, the Rampage feels almost exactly like a Raider, which was reasonably comfortable in the first place. The shape of the blaster, and the mag well being situated on the side rather than facing downward made slam firing an absolute breeze!

But enough about the cosmetics and the feel of the blaster; we’re interested in PERFORMANCE!

Much like the Retaliator, the Rampage delivered the goods on the promises printed on the box. And in style. We found that the Rampage was actually far more consistent in its ranges when compared to the Retaliator. Even when slam-firing, it was definitely getting those ranges that we were hoping for. It had no real problems in making the ever inconsistent Raider look silly in the end. However, we did have one or two jams with the new drum. We believe though, that it might’ve just needed some warming up and getting used to. It’s working like a charm now. We’ll never ever go back to 18 drums ever again if we had the choice! Speaking of drums, here’s a comparison:

Overall, we found the Rampager to be a great blaster. When put next to the Raider, it looks, feels, and performs like a King beside a peasant. When put next to the Retaliator, it’s more consistent and has a bigger capacity. Being a direct plunger, it has some potential for modification, so look out for the mod guide in the future!

The Rampage in its current state would definitely be great for Foam Fortress: Sydney. It would make a fantastic Medic blaster. Not only that, but it seems like the perfect blaster for games such as Humans vs Zombies due to its light weight, capacity,Â maneuverability, fire rate, and power. Only time will tell whether it’s suitable for use in PEW or not.