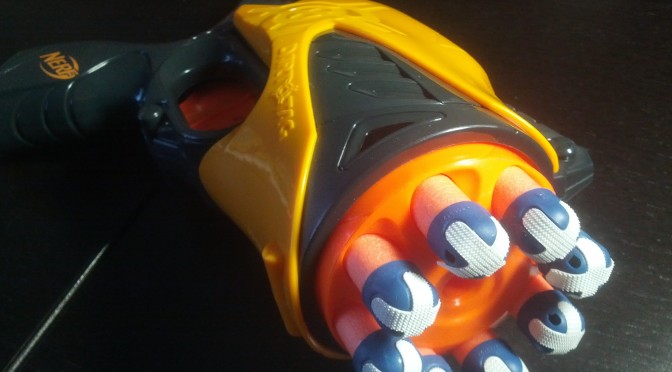 This little Pistol created quite the stir within the Sydney Nerf Wars community when we were informed of its existence. An 8 shot, auto advancing turret with semi-automatic fire capabilities is something to not be sneezed at. And to make it all the more attractive, it wasn’t a flywheel blaster! No need for batteries and no need to worry about it making all sorts of ugly roaring noises that would (theoretically) give away your position. There was a lot of speculation being thrown around among the members, speculation which is about to be ended (Urban Taggers and SGNerf have done it already, as always…) now that Echoes has nabbed one from Target at a cool $19. Is the Snapfire 8 all that it’s been cranked up to be? Let’s find out!

The first thing we noticed about the Snapfire is that it looks remarkably like the Sharpshot and the Speedswarm or the Swarmfire had a baby (This is one of those scenarios where we’d be wondering “WHO’S THE FATHER?”). When taken out of the box, it looked fairly impractical, to say the least. The front of the blaster is fat and chunky, for lack of better words, and the back end is very slender. It just looked like an unbalanced blaster. The handle is abnormally long and the trigger is ENORMOUS. Â But like any reviewers, we took it in hand and gave it a whirl.

The results may surprise you. The blaster is deceptively comfortable with the handle actually fitting in an adult sized hand for once. It isn’t all that front heavy either, considering 90% of the blaster is located at the front. The trigger, however, did prove to be a bit of a stretch. I suppose my fingers, just aren’t long enough.

One of the doubts that have existed since the rumours about this blaster began was the trigger pull. Since the main spring is actually bothÂ primed and released by pulling back the trigger, many people in the community assumed it would be too hard for the normal Nerfer to pull.Â The fact of the matter is, it isn’t too hard to pull if your hands are big enough (as iterated by Pocket at Urban Taggers). While it may takes some getting used to, firing in “Power Mode” isn’t a big deal. Sure, if you try to unload all eight darts in one fell swoop, you’re going to have a bad time (and not because your trigger finger gets sore from all the pulling, we found, but because your trigger finger makes constant contact with the wall of the trigger guard!). But overall, with enough practice and trigger finger muscle building, this is a practical blaster. If it’s too hard for you to fire it in Power mode, take a look at the handle, where you’ll see a knob which will let you fire it in Speed mode (which is considerably more manageable).

Performance-wise, the Snapfire 8 is an impressive piece of kit. Out of the box, it’s hitting ranges of about 25 feet flat in Speed mode, and 30ft flat in Power mode. It’s reasonably accurate and will serve well as a sidearm for those who need a bit of extra firepower up close. Can this replace the Maverick as the sidearm with the capacity? Does it surpass the Barricade for the semi-auto features? We think it can, but don’t take our word for it. This blaster, in the end, is highly subjective. Not everyone will find it easy to use or comfortable. And not every Nerfer out there will think it’s all that useful. This is one of those “hit and miss” things that Nerf releases every so often. It’s really for you yourself to decide in the end.

Once modified, we believe the Snapfire will be the premier Pistol in Foam Fortress: Sydney for the Demolitionist. Being fairly weak in upfront combat, the portable form and semi-automatic feature of the Snapfire will give the Demo every chance he/she needs to survive. It will also prove useful for Wardens, but because sneaking and mobility aren’t high on this class’s priorities, a Barricade will likely be more suited.

As mentioned above, your fingers will get a real workout if you try to fire it rapidly. However, in the midst of battle, it’s unlikely you’ll ever need to unload the whole eight darts. You’re likely to be shot if you fail to tag them within the first three shots. So, really, the painful trigger pull should really not be too much of an issue in the heat of combat!