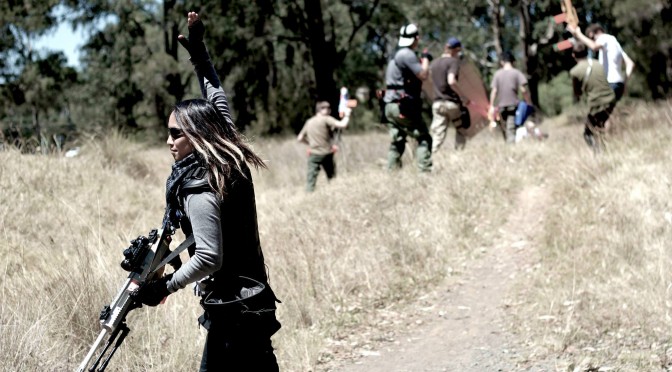 Foam Fortress: Sydney is an innovative style of gameplay that takes Nerf Wars to a new level. It utilises a system of class loadouts to create a more involved and engaging game. These class loadouts encourage a stronger sense of team play as opposed to PEW, where it is very plausible to venture off and “solo” the game without much interaction with your team. It also puts a stronger emphasis on the objective, rather than just a straight deathmatch. It creates a complexity to Nerf that was previously seemingly unattainable.

In Foam Fortress: Sydney, each team is allocated a specific area of the map where they begin the game, where they can respawn if they have been tagged, and where they can repair/resupply their equipment. This area is known as the Base, and it is marked with a large construction cone.

The Base consists of two main parts:

To Respawn, a player must physically touch the construction cone, whether it be with their hand or a piece of their gear that they are holding. Touching the construction cone will also allow them to resupply from the supply boxes and repair their destroyed equipment (Destroyed equipment will be explained in more detail in a later section). Once they have touched the Cone, they are free to return to the battlefield.

Invulnerability while in Base

Players are considered “in Base” if they are within a 2 metres radius of the Construction Cone. This means they are invulnerable to all sources of Damage until they leave the 2 metre radius (i.e. receive 3 Tiers worth of defence against incoming Damage). The 2 metre radius will be marked

Bases can be destroyed by High Explosives (Tier 3 Damage) making direct contact with the Construction Cone. When a Base is destroyed, players can no longer use it to Respawn, players cannot access the supply boxes, and it no longer gives invulnerability to a 2 metre radius.

Damage and Effects of Damage

Tags, in Foam Fortress: Sydney, can come from many different sources, including Darts, Melee, Grenades, and High Explosives. These varying sources of tags inflict different types of Damage, which can affect the ways players can Respawn.

The first tier of Damage includes both Darts and Melee. These are the most common and basic sources of tags in any Nerf-related event. With reference to the General Rules Set, Dart Damage is taken when you are struck by a Dart, fired from a Blaster, on the full (there are some provisions for ricochets – refer to the General Rules Set for more information).

Melee Damage is either when:

If you are tagged with Tier 1 Damage, you are considered Injured. When Injured, you are to crouch on the spot, take a knee and make a decision as to what your next course of action is. You will have up to four courses of action if you have been Incapacitated:

Once you have decided to move from your spot, you cannot return to it and be Resuscitated or to use your Personal Defibrillator Unit. Your decision is final and you must either go in search of the Rally Point or Respawn at Base.

The second Tier of Damage is exclusive to Grenades. Grenades are signified by Nerf branded (or equivalent off-branded) mini vortex howlers or footballs. They follow similar rules to those of Darts, in that you must be hit on the full or else the tag will not count.

If you are tagged with Tier 2 Damage, you are considered Incapacitated and must return to Base to Respawn. Unlike with Tier 1 Damage, there are no choices in your courses of action. This means that you cannot wait for Resuscitation, use your Personal Defibrillator Unit, or seek out the Rally Point.

Tier 2 Damage is also able to destroy the Warden’s Shield, which will be outlined in a later section.

The third Tier of Damage is held by Titan Rockets and Mega Howlers, and is exclusive to the Demolitionist Class. Similar to the other Tiers of Damage, you must suffer a direct hit from the Rocket or Howler before you will be considered tagged. Additionally, Titan Rockets must be launched by a Titan or Hydrocannon, while Mega Howlers are simply thrown.

If you are tagged with Tier 3 Damage, you are considered Eliminated and must not take any further part in the game. You must return to your team's Base and spectate the rest of the game.

Below is a cheat sheet that will help you learn the effects of Damage on you and other players in game.

The team that completes the objective first wins

A Demolitionist’s Rocket is able to destroy a Base and force a rout situation on the team with no Base. A team can win by “routing” the enemy team.

A Demolitionist’s Rocket is able to eliminate players who are hit by it. It is possible to win by eliminating the entire team.

Currently we play three gameplay formats, with many more in development:

The objective is to retrieve your opposition’s flag, while still in possession of your own.

King of the Hill (KOTH)

The objective is to hold a capture point for a set duration before the opposition can.

The objective is for the flag bearer to reach the opposition’s flag holder.

For information on the other elements of Foam Fortress: Sydney, follow the links below:

One of the key parts to Foam Fortress: Sydney is the establishment of Class loadouts. Each class is designed to fulfill a specific role, such as midfield dominance, support play, or flanking. The gear slots that are allocated to each class function to reinforce their role, giving both flexibility in the blasters they can use and the equipment they can carry.

To map out kits and equipment for each class, FF:S uses a system of gear slots which can be filled. They appear as follows:

Some classes will not have all Gear Slots available to them, and others will have opportunities to sacrifice one slot to improve the capabilities of another.

There are six classes in total for use, all with different abilities. They are:

The Infantry class, specialising in high fire rate and longevity in the field.

The Explosive class, specialising in explosive damage and opportunistic play.

The Guerilla class, specialising in hit and run combat and disrupting enemy strategy.

The super soldier which requires team balance to succeed.

The gear available for use in Foam Fortress: Sydney is separated into a number of categories that will fit into the class gear slots.