Team Deathmatch (TDM) is a very special part of SNW’s history. It was the first game type we played as a community, and it’s one that’s still very much an integral part of our events today. The simplicity of the game type is what makes it so easy to pick up as a beginner and so enjoyable to play regardless of how experienced a player is with Nerf. Due to this, it is used to great effect as a way of warming up attendees for the upcoming games over the rest of the day.

The aim of TDM is as simple as it gets: eliminate the opposing team before they can eliminate your team. Games of TDM tend to be longer, which can lead to intense long ranged fire fights and high pressure situations as the game progresses. It is advised to carry a decent complement of darts for each game. 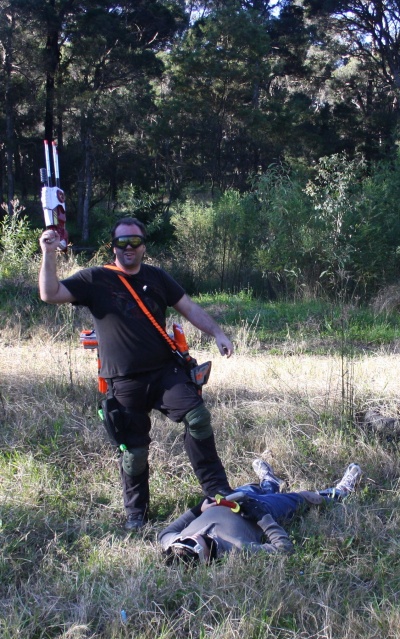 TDM is split up into two sections: Respawn Time and Sudden Death. There are some subtle differences between these two sections as outlined below:

If you have been hit before the beginning of sudden death you may respawn as long as your team has at least one other member alive.

Every effort must be made to return to your respawn point as soon as possible and as directly as possible. Lingering around active players will no longer be tolerated and may lead to the player being eliminated from the game by a SNW Administrator.

A: Yes, you’re still very much in the game. Respawn as quickly as possible so you can help your team mates out in the field. You will only be eliminated if you were tagged AFTER the whistle blows. Be warned though, if you don’t respawn before the rest of your team was eliminated, your team will lose and you’ll miss your chance to participate!

A: Tell them that they were Tagged before. If they ignore you, alert the War Organiser or a SNW admin present on the day. The issue will be dealt with fairly.