King of the Hill

King of the Hill (KOTH) is a game of strategy, positioning, and composure. Much like CTF, there are strong elements of teamwork involved in seizing the Hill, and holding it until the timer runs down. This game type is a classic battle of attrition, where both teams attempt to wrestle control of the Hill from each other with force!

The aim of KOTH is to hold the Hill for a set aggregate time before the opposition can do so. In a typical game of KOTH, players will find themselves under constant fire as they approach the Hill. This gives rise to a gametype with a heavy emphasis on composure under pressure. 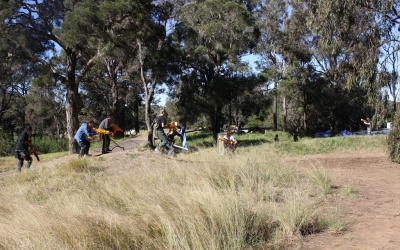 The rules for KOTH are listed below:

This section is aimed at answering some of the most common questions about KOTH:

A: The timer will start when the first player from the team has touched the hill marker (usually an upside down bucket)

A: Call out to them and inform them that they were tagged. If they ignore your calls, alert the War Organiser or a SNW Admin present on the day. The issue will be dealt with fairly.