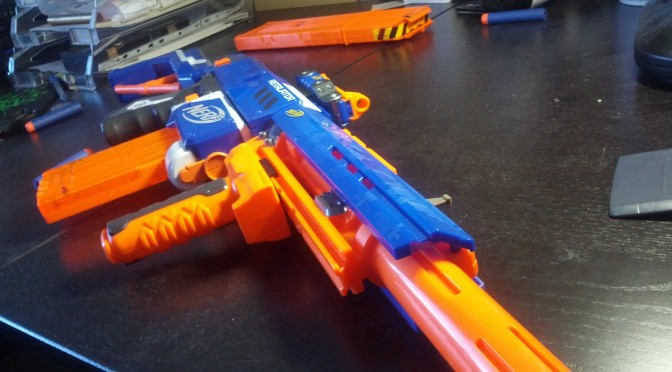 There has been a lot of hype surrounding the release of the new Nerf Elite lines, with Hasbro making outlandish promises of 75ft out of the box! This new line of Blasters sparked a lot of questions and quite a bit of controversy throughout the online Nerfing community. But thanks to Amazon.com (and a cool $40 shipped to Australia), Echoes (the Sydney Nerf Wars Admin who buys a lot of stuff…) has managed to procure a couple of units and is ready to give his thoughts! (I know we’re a little late on this, with blogs such as Urban Taggers, SGNerf, and Foam Dart Goodness already having reviews and/or modification guides on them, but we thought we’d do this anyway).

Immediately upon taking it out of the box, we can all tell where the Retaliator takes its design cues from – the good old Nerf N-strike Recon cs-6! But there are definitely some changes from the old model. Nerf has replaced the Tactical light with a Fore grip, and the original (albeit flimsy) stock with a sharp looking short one. They’ve also removed the Leaf sight and been so kind as to provide us with a very handy 12 shot clip system magazine. It’s an attractive blaster overall, but we aren’t just here for the aesthetics, are we?

Performance-wise, there is no doubt that it’s superior to the Recon cs-6 in every way. There’s just no other way to say it, to be honest. We believe this would be mostly attributable to the direct plunger system that Nerf seems to have gone back to using. It must be said though, that 75ft out of the box is a slight overstatement. While the Elite Darts are definitely MUCH better than the old N-Strike Streamlines, they’re still somewhat inconsistent. In test firing, we were getting a whole lot of dart swerve and a lot of darts doing that “I’m going to fly straight into the ground” thing that Streamlines seem to like to do. Is it capable of 75ft? Yes. Is it capable of doing it every shot? Not unmodified it isn’t (but that’s for a later date!).

In the hand, the Retaliator is a comfortable blaster. The handle fits nicely into an adult sized palm and the Fore grip is a nice touch if you feel the need to use it. At first, we were slightly concerned with the small form of the stock and that it would be slightly awkward to rest on your shoulder, but this just isn’t the case (for me, that is). I’ve found that the shorter stock actually forces you to bring your elbows in and keeps your form a little more compact. It’ll help with making yourself a smaller target during those intense firefights you’ll be having!

In general, the Retaliator is a solid blaster choice. It packs a bit of a punch out of the box and definitely has some potential for modification. Keep a look out for when we do that. Below are a couple of pictures which showcase a few of the more interesting features of the Retaliator:

The front attachment features a rifled barrel. Aside from looking cool, we’re pretty certain it’s non-functional. A nice touch though.

Probably the biggest question on our minds was the size of the 12 shot clip. Well here it is, for your viewing pleasure.

It looks even more AWESOME with some N-Strike Longstrike cs-6 accessories added to it!

One of the big questions that was being thrown around the Sydney Nerf Wars community was whether the Retaliator could keep up in games such as Foam Fortress: Sydney, or PEW. While there’s no telling how it’ll stand up in PEW in its current (unmodified) state, you could probably get away with running the Retaliator in FF:S as it is right now. It will sit nicely in either the Assault’s or Medic’s set of kit with ease. There’s no doubt that when modifications are applied that the Retaliator will be an even more viable choice.

Keep an eye out of the upcoming mod guide!

– Echoes, on behalf of the Sydney Nerf Wars Admin team.